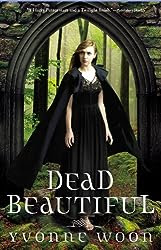 A haunting love story about desire, danger, and destiny. After Renee Winters discovers her parents lying dead in California's Redwood Forest in what appears to be a strange double murder, her grandfather sends her off to Gottfried Academy in Maine, a remote and mysterious high school dedicated to philosophy, "crude sciences," and Latin: the Language of the Dead. It's here she meets Dante, a dark and elusive student to whom she feels inexplicably drawn. As they get to know each other better, Dante can't seem to control his attraction either, and their desires gradually deepen into a complex and dangerous romance. Dangerous because Dante is hiding a frightening secret. A secret so terrible, it has him fearing for Renee's life. Dante's not the only one with secrets, though. Turns out Gottfried Academy has a few of its own… Like, how come students keep disappearing? Why are the prefect-like Monitors creeping around campus during the night? And what exactly are the Headmistress and Professors really up to? Renee is determined to find out why. Dead Beautiful is both a compelling romance and thought-provoking read, bringing shocking new meaning to life, death, love, and the nature of the soul.

I want to start off by saying that I don't usually give a DNF (do not finish) tag to a novel. With that being said, I do want to point out why I took a chance on this novel.

1) The cover. There's something about people wearing cloaks that suggests mystery to me. And the fact that the girl is standing in an archway of some type piqued my curiosity as to why she was there.

2) The title. I thought that the book might be about some type of paranormal creature, more specifically vampires or zombies, and since I'm always on the lookout for new authors in that genre, I was intrigued.

Reading the blurb made me revise my opinion somewhat and I dove into the novel, ready to see where the author was going to go with the story.

That's when I ran into problems. The "mystery" about her parents' death didn't capture me the way I thought it would. Maybe it's because of the way the set of events leading up to the discovery of her parents felt disjointed and a tad bit unbelievable. I can understand her going into shock when she discovered the bodies but not the stuff that happened before that.

I didn't warm up to the main character, Renee, at all. She irked me from the moment I met her until the point where I stopped reading. Her attitude was grating and I felt, entirely ungrateful for someone of her age. I know she suffered a double loss. I know she was grieving, but at the age she is, she should have behaved better. I felt like I was watching a five-year-old throw a tantrum because they couldn't have their way.

The grandfather felt flat to me and beyond cold. I know that he hasn't had anything to do with her but his reactions toward her were beyond aloof.

I couldn't muster up the energy to care that she was leaving behind friends and having to move. That's when I stopped reading. When I'm that irritated with a character and the plot which didn't pull me in, I quit. I know, bad thing to do but I decided not to continue.