Sara Kinsale is stunned to be thrown together with a prince of the desert, and even more so to find herself unbelievably attracted to the elusive Sheikh Kahrun bak Samin... Especially as she's indebted to the sheikh and it's only a matter of time before he demands to be repaid!

Kahrun soon names his price -- marriage! He needs a trophy wife, and Sara is already living under his roof. But will she be the sheikh's bride in name only -- or will her marriage duties be a little more intimate....?

Sara is a woman trying to prove herself and Kahrun is a king with a problem. When two very determined individuals have a run-in, an explosion of feelings was inevitable.

Kahrun really was a man in command while Sara was still trying to figure herself out and suffers from some major insecurity issues when it comes to herself and her family.

Watching the two of them learn about the other and about love was a sweet and sometimes funny journey. 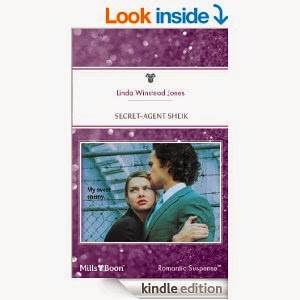 The future of his people rested on secondborn son Sheik Hassan Kamal's mission: infiltrate Rahman Oil and confirm that the company was a front for the terrorist group suspected of kidnapping the crown prince of Montebello. But his contacts had left out one important fact. The company CEO was a woman—the stunningly beautiful, seemingly innocent Elena Rahman. Courting Elena was the safest way to learn corporate secrets. But as passion between them raged, instant and hot, Hassan fought a losing battle against falling for the daughter of his country's deadly enemy....

Elena is one of my favorite characters in this book. Not just because she is the main character, but because of her spunk, grit and determination to succeed in a man's world and because she took charge of her love life. She didn't let it lead her around.

She was powerful, intelligent yet knew when to let her inner woman out for a stroll. It was fun watching Sheik Hassan be confused, intrigued, and finally accepting Elena, flaws and all.

Would I recommend this book? Yes especially for those that like strong female heroines and the men who love them.

When prim professor Zara Paxton ventures to distant Bahania, she wants only to find the father she'd never known. But her father turns out to be King Hassan of Bahania. The desert king promptly put his "princess" under the protection of a muscular, mesmerizing Sheik, who sets Zara's sense aflame, yet he refuses to quench the fire!

Steely security liaison Rafe Stryker scorns lasting love. But before he knows it, the bespectacled brunette sneaks into his heart, making him throb with the urge to taste her sweetness. Clearly, innocent Princess Zara wanted to be his woman, but taking her was tantamount to treason. Rafe knows the consequences, but even he can stand so much temptation.

AMAZON | ARE (All Romance)

Okay when I said I like it hot, I guess that included a certain desire to read desert-based stories. Handsome, rich sheiks anyone?

I went on a search at my local library for books with "sheik" and found several. Plus, my Kindle is about to have a nervous breakdown because of the books I've been snatching of late that have sheiks, billionaires and millionaires in them.

This was one of the ones I found at the local library (thank you so much for having it!) and I enjoyed it tremendously.

Rafe has closed off his heart and any desire to settle down in favor of his job and freedom. Zara is a nerd (yes!) who learns some unexpected truths about her parentage. When the two met it is anything but ideal but what emerges from the chance encounter is something spectacular.

Both characters were well-written and developed as were all the secondary characters who made this story come alive.