Kishaz Reading Corner: Maid for the Billionaire by Ruth Cardello

Dominic Corisi knew instantly that Abigail Dartley was just the distraction he was looking for, especially since having her took a bit more persuading than he was used to. So when business forces him to fly to China, he decides to take her with him, but on his terms. No promises. No complications. Just sex.

Abby has always been the responsible one. She doesn’t believe in taking risks; especially when it comes to men - until she meets Dominic. He’s both infuriating and intoxicating, a heady combination. Their trip to China revives a long forgotten side of Abby, but also reveals a threat to bring down Dominic’s company. With no time to explain her actions, Abby must either influence the outcome of his latest venture and save his company or accept her role as his mistress and leave his fate to chance. Does she love him enough to risk losing him for good?

AMAZON | ARE (All Romance) | SMASHWORDS

I've been feeling romantic lately and grabbed this book from one of my TBR lists. I read it in one sitting and enjoyed it so much that I've re-read it two more times since the first round.

Abby is my kind of girl who is spunky, responsible and family oriented. She cares deeply for others and tries to do the best for her younger sibling. Most times this means sacrificing the things she wants to provide stability for her sister and her niece.
Dominic, on the other hand, is an emotional black hole and tornado all rolled into one very chaotic and miserable package. When he meets Abby sparks fly and they are off to the races in a very intense, yet emotionally revealing, character-driven storyline that kept me riveted.
Would I recommend this book? Yes!


DON'T MISS THE OTHER BOOKS IN THIS SERIES
Posted by K Garcia at 4:53 PM No comments: 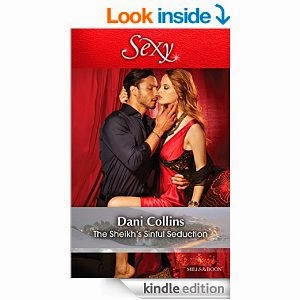 Ruled by duty…driven by desire!

A king amongst men, Sheikh Zafir cannot allow emotion or feelings to colour his judgement.  His carnal desires must be curbed for the sake of peace in his kingdom.  But his control is tested by the feisty Fern Davenport; Zafir must have her.

Innocent Fern Davenport tries to resist the Sheikh’s skilful seduction – she knows that he could never marry her. But under the blistering sun an incendiary thirst awakes and one incredible night results in a very lasting consequence.

Now this Sheikh must claim his heir and his bride!

There were some hot moments and there were some okay moments. Zafir definitely was very alpha male and Fern was meek but not so meek that she wasn't able to stand up for herself and the things she believed were right.

I did feel that the more worldly Zafir took advantage of Fern just a little bit because of her innocence but other than that one moment, I thought the story was fine.

Would I recommend this? Yes, it's a nice read.
Posted by K Garcia at 8:28 PM No comments: